During this exciting topic, we will be looking at the plants, people and animals of the world's rainforests. We will study the layers of the rainforests and look at the differing flora and fauna that live amongst them. Highlighting issues around deforestation and climate change, we will look at how important rainforests are for the rest of the world. We will study maps and atlases to look at locations of geographical features.

For our first history topic, we will study what life was like for early Britons. Stone Age life in places such as Star Carr will show us how our ancestors lived and what was different thousands of years ago. We will think like archeologists by looking at cave paintings and study real artefacts from the stone age.

Moving forward in time, we will look at the invasion of Britain by the Romans. We will try our hand at mosaics, chariot racing and making Roman pottery from clay. We will study the rise and subsequent fall of the Roman Empire and what they left behind. 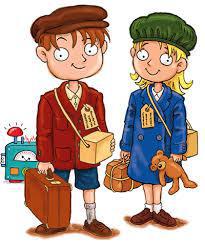 For this topic we will look at life in Wartime Britain - what air-raids were like, how children felt being evacuated and the effects of rationing on meat, fruit and veg....and sweets! As well as looking at the geography or Europe, we will learn some famous Wartime songs and accompaniments and even try our hand at some traditional 1940's dance!